Histories Past and Present 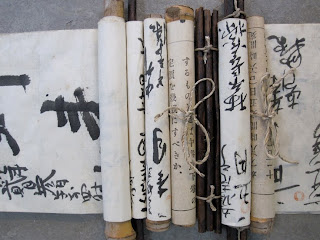 A scroll is a roll of parchment or paper which has been written, drawn or painted upon for the purpose of transmitting information or using as a decoration. Scrolls were the first form of record keeping. They were also used in recording history and literature before the bound book.

Come said the muse,
Sing me a song no poet has yet chanted;
Sing me the universal. Walt Whitman 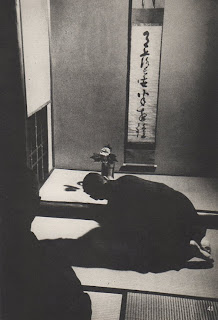 Without memories, there is nothing to account for our lives. With memories, we develop a language, drawing from universal concepts. 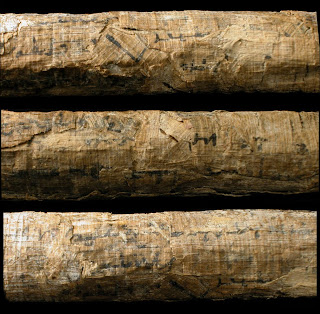 "Leaning against the wall were rows of ancient, tattered Chinese screens. I peeked between torn corners to see layers of paper, some yellowed with age but covered with exquisite calligraphy. A new body of work had begun." Roberta Marks, A Place Between 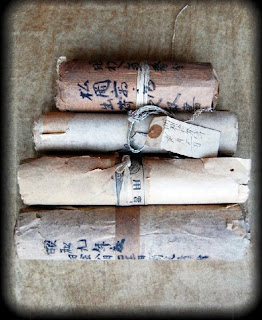 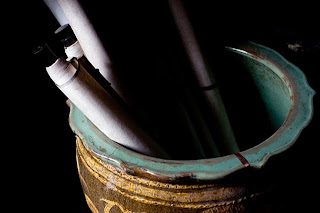 I draw these letters
as the day draws its images
and blows over them
and does not return. -- Octavio Paz 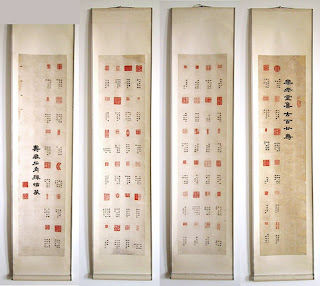 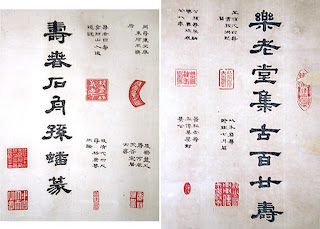 A detail of the seals and chops used in the above scrolls. 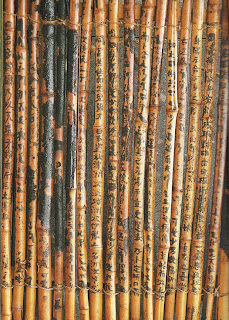 A scroll made of bamboo
Man is but a part of the fabric of life -- dependent on the whole fabric for his very existence.
--- Gary Snyder 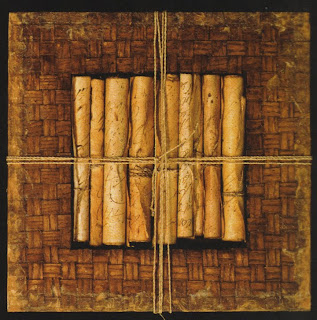 The above is titled LETTER FROM THE OLD WORLD by Lissa Hunter. Her book is LISSA HUNTER: Histories Real and Imagined. She also has a wonderful website which you can find here.

"Any process , whether it is washing dishes or making art, is begun to fulfill a function, is formed by appropriate techniques and materials, and if affected by cultural and historical influences." --Lissa Hunter

Donna, your images of scrolls are endlessly fascinating and the quotes are very stimulating. I particularly love the bamboo scroll. Thank you.

Another delicate and beautiful post Donna. Always a pleasure to read!

donna, your posts are always so inspiring. thank you

Lovely thoughts and images, Donna - I am always impressed by your thorough and insightful research - thank you xoxoxo

OMG- These images are gorgeous! The tactile quality of paper and fabric are one of the things that attract me to this medium. These photo's make me want to reach into my computer and stroke them, smell them, listen to them...

Lovely and inspiring images and quotes. A calming place to visit.

absolutely gorgeous and very inspiring, there is something so curious and intriguing about the roll of paper...

what beautiful images & wonderful quotes. there's definitely strong appeal to a scroll of paper and the foreign language it carries. hope all is well.

There is always a kind of infinity in the paper that's unrolled. Beautiful!

I am always drawn and intrigued by all things from the east. Lovely presentation and thoughts and a few new places to visit. Beauty to warm the spirit.

My eyes are feasting on your images yet again Donna! Thank you for this resplendent post you have created for our enjoyment.

Is the top image of scrolls you have made? Lovely in their irregularity!

I love scrolls as objects. I did a series of them about a year ago, with rusted papers. The papers just called out to be scrolls. It's such an elegant way to feature beautiful papers.

I like scrolls as well and have seen some beautiful ones in museums. Once I saw an artist using a very long narrow canvas upon which she painted with house paints to create a fabulous scroll. Then there are the scrolls of music for player pianos. And the Dead Sea Scrolls... I saw a copy of the book of Isaiah in Jerusalem and the cave in which they were found. Such ancient history carries meaning to our generation. Amazing.

Glorious images Donna, especially the first one. I love old papers yellowed with age and scrolls are even more exciting.

I always know I can find pure loveliness here. Thank you, Donna.

These beautiful images are reminding me of the garden plans laid out on my drafting table right now. I'm also struck by the notion that rolling a scroll is similar to condensing a large, important idea into something more compact or essential. Loved the quotations that you chose to accompany them!

I love the way in which the shape of the bamboo echoes the shape of the scroll itself. Long, sinuous rods of fiber containing much cellular information. Thank you Donna, for these quiet and reflective images; perfect for a still, silent winter's day.

Your artfully thematic and metative posts resonate with me and linger in my thoughts. Thank you!

as always, a good place to visit

Beautiful posts, calming and tranquil, a good place to be

these scrolls are very fascinating and inspiring! It's a pleasure looking these pictures. thank you!

simply magnificent collection of images and words... the way you organize color is ever soothing.

My goodness, did not realize you were a *neighbor*...have enjoyed my visit over here today very much - I have learned something about this beautiful scrollwork! Off to check out your links...thank you for the inspiration.

Dear Donna, I get so much from your blog, the beautiful quotes and art you share always moves me, and I often have to visit again and again... I hope you get some sunny days soon. We haven't had a big storm in Oregon for awhile yet... sending wishes of warmth and sunlight... roxanne

A beautiful post
I don't know, something about the bamboo scroll takes my absolute attention. Intimate and open. Thank you.

A sumptuous feast for the eyes Donna - and lovely gentle thoughts to accompany them. Thanks for a lovely place to stop and spend time.

What a wonderful theme for a post and a beautiful selection of images. I am honored to be included here!

I have just found your blog, what a beautiful, rich post. I'll be back for more.

Stunning post...I love the mystery of the rolled paper. Thanks for sharing so much!

exquisite art...thank you Donna for sharing!

Thanks for adding another layer. Always a joy.