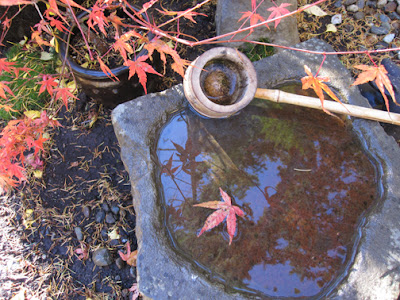 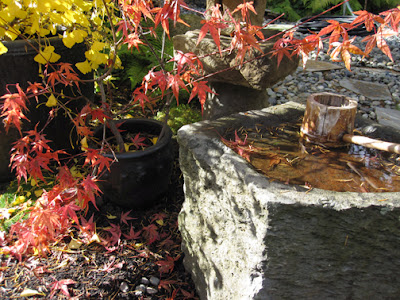 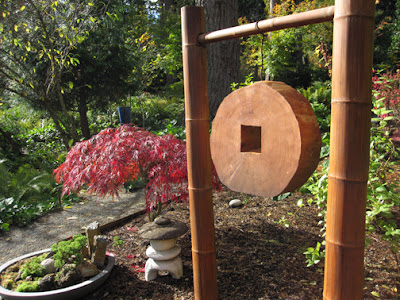 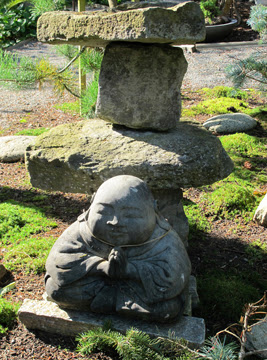 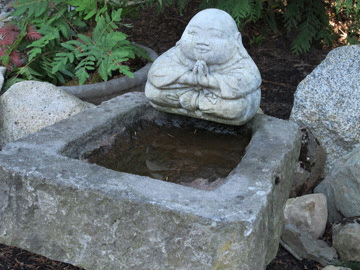 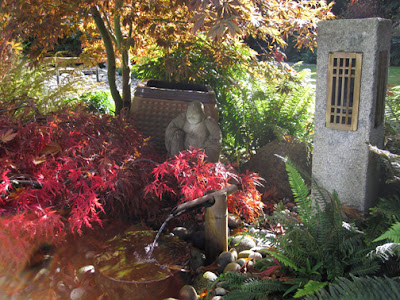 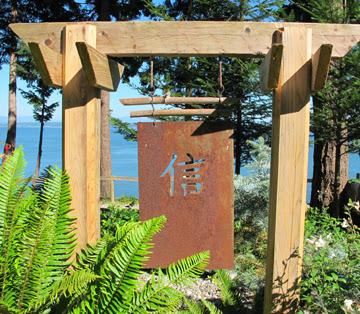 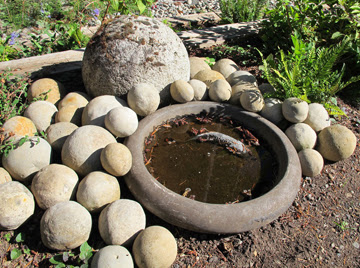 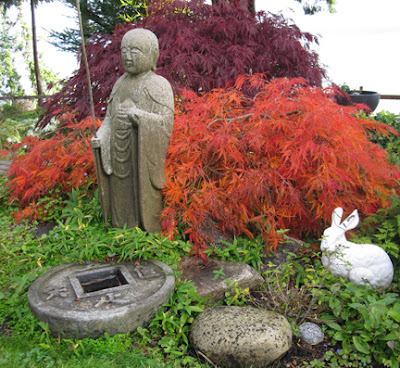 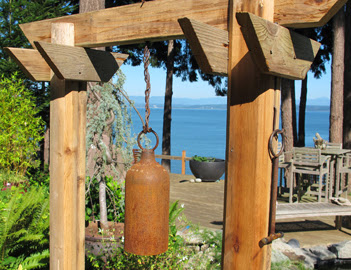 My new bell.  My husband built a small torii gate.  When I go outside I face the water and ring it 3 times.
The temple bell stops.
But the sound keeps coming
out of the flowers.
--- Basho
Posted by layers at 8:51 PM

One of my happiest commissions was working on 'wanderlust' a production about Basho's long journey where each scene was based on a haiku.
This is a beautiful post.

I am smitten by the cedar enso and the rusted good fortune character! How lovely. Such wonderful photos of the fall leaves too.

I feel I am sheltering in this post for a few minutes respite. Your garden is a sanctuary and the words a prayer. I love Tom Hennen's poem.

A breath of fresh air. A calming, centering place to visit often. Thank you for sharing your most wondrous garden.

D - it is a beautiful thing to create cal mess and simplify in one's surrounds. I enjoy coming into your garden and feeling the serenity. Interesting that you also posted on haiku. As part of the recent Maleny Celebration of Books there was a class ink writing haiku. Fiona and I attended. We now need quiet time to apply the learnings. Go well. B

Such a lovely space and lovely words. Love the round rocks. A friend gave me some tiny ones but not sure where they originated.

Thank you for the lovely visit to your garden. You are a wonderful guide offering up beauty of sight, sound and spirit. Very gracious and inspiring!

your garden soothes me even online! How I would love to sense it in other ways. Where is that lovely stretch of water?
Thank you for your peacefl=ul photos and your willing husband!

Your ability to offer serenity through your posts is supreme; thank you!

I could feel the breeze from the water! the new "man" in your garden is very handsome. When my husband died several years ago his fellow workers sent me a small Japanese maple to honor him. It has grown short and wide over time. now when I greet the tree I will be greeting both John and you. thanks for the lovely post.

Wonderful post. What a beautiful place you've created.
I'm old school in the haiku department, as well...I don't like it that so many people insist on changing the rules about 5-7-5 and still feel they can call what they create haiku.
Hope you're feeling peaceful and blissful.

So much beauty here... and peace.

Your place on the Sound is so beautiful. I'm sure you find rest there. I'm also a fan of haiku but have trouble writing it no matter how I try.

It seems each nook and cranny has had the attention of your artist's sense of esthetic and care. What a beautiful space you have created Donna.

such gorgeous details
your garden overflows with a feeling of peace that is inspiring.
and to have a view of water like that! such a grand gift!

what an incredible sanctuary and thank you for bringing us in to this sacred space...

this garden must be such a place of peace for you and your guests. it looks to be a place to wander wordlessly.

What a beautiful garden.Having just returned from Japan and experiencing "the colour", and seeing your garden makes me want to create a similarly perfect space at my home.

Beautiful! Gardens are a blessing. A few years ago my husband built me a small "native plant" garden in our front yard as our native butterflies, bugs and birds need the native species to survive. We are slowly attempting to "naturalize" a bit of our small city plot and be rid of the "imported" grass. We started a small plot of native grass and I must say we get a lot more birds visiting now than ever before which is a delight.

Wonderful to re-visit your blog...it's been a long time!

Dear Donna,
Merry Christmas and a very Happy Healthy New Year to you and all your loved ones.