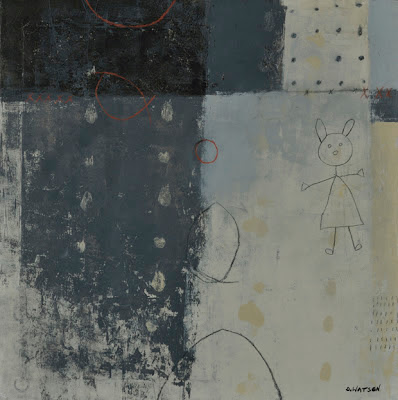 I had a wonderful trip to NYC to see my son, Matt's graduation from Columbia University with his MFA.  We ate in fabulous restaurants and bakeries, went shopping in Soho, and went to several books stores where I looked at many art books (and came home with a few).   My son now has a website which you can find here and below is one of his paintings. 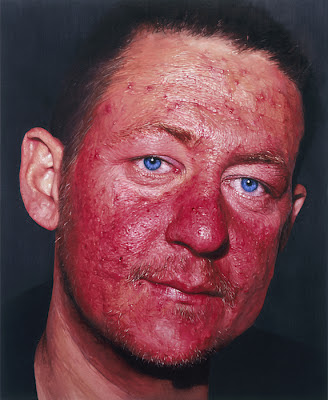 Matthew C. Watson, oil on copper, 9"x11"
I did see some very interesting exhibits at some of the NYC museums.  One of the artists I discovered at the Museum of Modern Art (MoMA) is Taryn Simon.  She is considered an art documentary/photographer and the name of her exhibit is A Living Man Declared Dead and other Chapters I-XVIII.  She spent 4 years and traveled to 25 countries researching and recording bloodlines and their related stories. 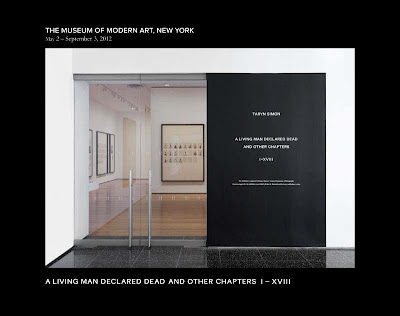 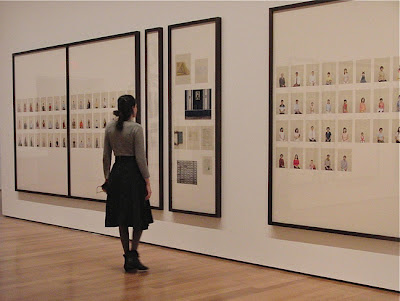 In each scenario, she would photograph any family member who would pose for her. 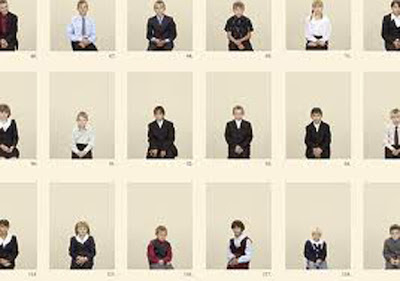 Another artist, Cindy Sherman (b. 1954),  has a huge retrospective at MoMA.  She is widely recognized as one of the most important and influential artists in contemporary art.  Sherman has spent many years creating her unique form of art... dressing herself up in costumes and make up and then photographing herself in different poses and backgrounds. 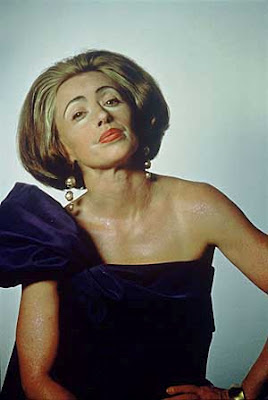 Drawing from an unlimited supply of images from movies, TV, magazines, the Internet and art history, she has worked as her own model.  She is her own photographer, model, make up artist,
hairdresser, stylist, and wardrobe mistress. 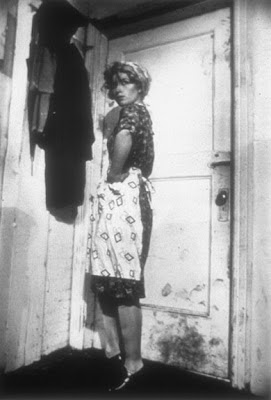 With an arsenal of wigs, costumes, makeup, prosthetic, and props she alters her physique and surroundings to the point of being unrecognizable as Cindy Sherman, the artist.  She explores issues of identity, representation, and feminism. 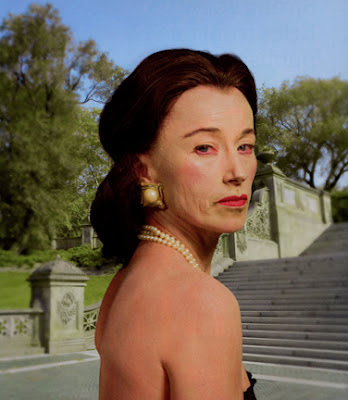 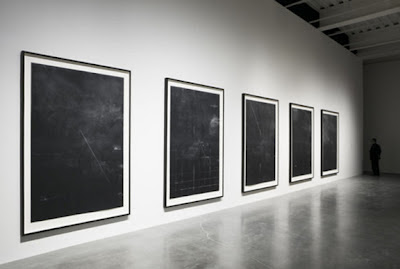 Her installation provides insight (the still moments of these artists conveyed in videos) into the way that film making intersects with painting, sculptures, writing and dance.

Klara Liden (Germany) also has an exhibit at the New Museum.   Liden scavengers the streets of cities all around the world for discarded materials, which she uses to build sculptural hideaways, scaled to her own body.  Her exhibit is titled Bodies of Society.  And yes, it did look like she had taken trash cans right off of the streets of NYC and placed them in the museum room.  She radically alters the space of the museum in order to expose it to the material and political realities of the world outside. 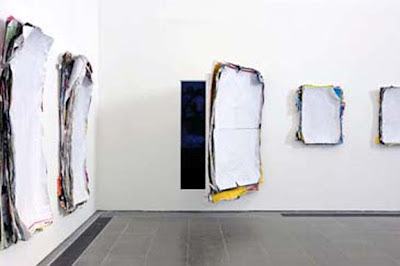 She engages with the folds and fabrics of cities she passes through, adapting public space to her own needs in the creation of a more intimate environment. 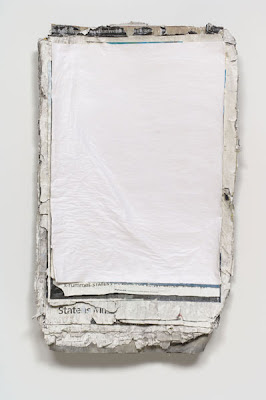 "They [critics] don't grasp that art tells you things that you don't know you need to know until you know them, that there's no way to know beforehand what might strike you, and that art isn't about understanding, it's about experience."  --  Jerry Saltz, Frieze Magazine, "Writing Wrongs"
Posted by layers at 10:04 PM

what an inspiring post! just when I was feeling a great deal of funk for the general blahness that is the machinations of art world shenanigans - its nice to be reminded of some things worthy of attention

Love the new look of your blog Donna and especially your header. You certainly squeezed a lot into your time in NYC. I had no idea Klara Liden's work was so large. Sculptural hideaways ... I like that!

Once again you've opened a door...

..you discover the door was never locked.

Wow! Some really interesting work. Thanks for sharing.

Awesome Donna thanks for sharing you journey. Love the last quote.

your new header is wonderful... and I adore that Salz quote... I may have to put that on my blog.. grazie mille!

I feel like my world has been expanded again. Thanks Donna, for taking us along with you on your trip through the New York City art scene. Its all about telling stories - art, movies, books, poetry - look around and notice.

Taryn Simon's work is particularly engaging for me in its story telling, as is Matt's work. Talk about up close and personal.

Your work, Connections III, also seems to tell a story.

love the new header! sounds like a fun, art filled trip. very NYC. thanks for letting us have a peek by taking all the photos and remembering it for us.

Wonderful survey of what is going on in NYC right now. And thanks for that because I have not seen any of these exhibits myself. Your son, by the way, is very talented. Guess it must be genetic :-)

to see the work of klara liden here makes me happy. I have a little poster of one of her paperworks on my wall, because I saw an exhibition in kassel/germany 2009.(if you like: you can see it on the last picture of this post: http://manoswelt.blogspot.de/2012/04/von-kreativem-chaos.html)
I am also fascinated of her videos.

thank you for sharing your NYC visit!
your son's work is really impressing!

it looks and sounds as though you had a wonderful and interesting time. your sons painting is so realistic and intense! reminds me of when i did a skin cancer treatment on my face... basically it burns off all your damaged skin and you look like that man does. no fun at all.

Thank you Donna for showing us NYC through your eyes. You must be such a proud momma!

...I would not get to NYC were it not for this...many thanks. I think most of these artists have important things to say, especially your son. The dog image is a heart stopper. He makes the viewer pause, consider. His voice is going to carry.

Sure wish I could join you in Portland...now wouldn't that be fun?!

D-what an amazing experience for you; and what brilliant work by your son.Go well. B

sorry about testing. just wanted tomake sure i could post before i wrote my comment. congrats to your son. such an interesting portrait.

and thanks for the art tour. glad you had this wonderful time in NYC.

"art isn't about understanding, it's about experience."

I love your map collage header so much, and your stick figure in the next image.

Subscribing to SFMOMA on Tumblr we've seen a lot of Cindy Sherman these past months, learning a lot.

Tacita Dean's work really interests me. I was here the other day and went off to look her up.

Thanks for this blog, and congrats again to your son, he's got some power going through him to us!

thanks once again for "food for thought" You did visit some thought provoking exhibits! It was interesting to see your son's work so very different from yours but thats a good thing!

sunday night sojourn into layers.
realizing entering MOMA in real time would be staggering....and i'd love to be staggered.
too long, no museums in my life.
pondering. possibilities.
thank you for the provocation.

Thank you, Donna, for the tour of New York art and artists! You certainly packed a great deal into your time, there. I was particularly taken with Klara Liden's work. Thanks for inviting us to share in your museum travels!

Congrats on your son's achievement, I'm going to my son's graduation in a week! Wonderful work, I would sometimes like a sculptural hideaway made of folds & fabric & trash cans.