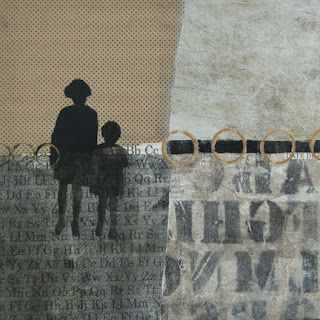 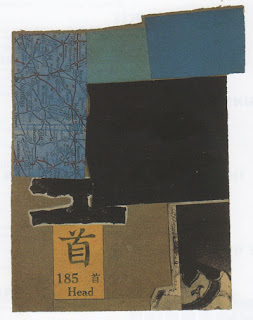 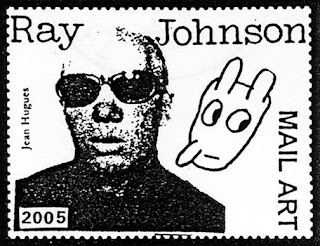 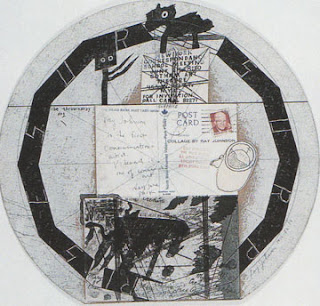 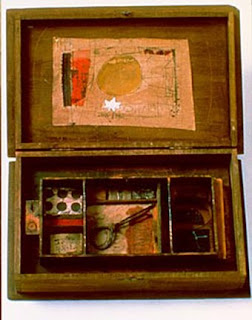 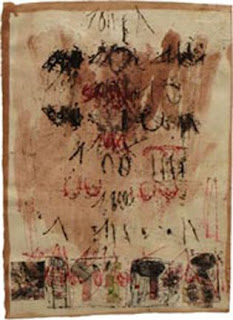 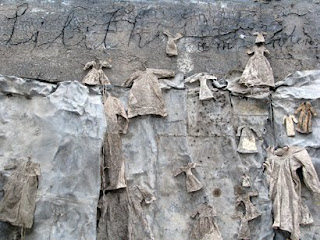 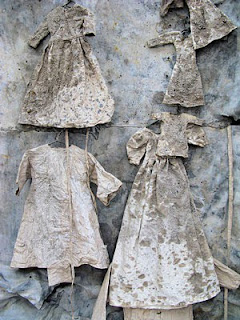 Hemingway said "write hard and clear about what hurts."

I have been particularly drawn to Hannelore's works - intimately small, personal story telling in textiles, shapes, marks. Forlorn is a good word for the overall atmosphere in her work.

In my family, WWII left a very lasting mark on those involved.

I love your "Childhood Memories" and as always lots of food for thought and new sources in your posts.

We all have a dark side, whether we admit it or not, Jung called it the shadow.

I must say that for me there is much learning in the difficult. It is like compost, this darkness that is used as a source of expression by the artists you show us here (and many others).

Thank you for sharing Donna, all my dark memories appears and sadness came over me. The line between light and dark is so thin. At the moment I write this down, my dog lets me know it's time to play....happiness !!!!

Watch out on the dark side and try follow the bright line. But never forget the colourful side sometimes.

I'm fascinated by the image-centric allocation (four pieces) in your collage. Great.
sorry my english :)

Much to savour here this evening.

I am born from German war survivors. I feel the burden that was passed on, like many other children born the same way...

D- powerful collage of yours and a powerful post. B

A wonderful post. I saw that piece, How to Draw a Bunny.

"We work in the dark. We do what we can. We give what we have. Our doubt is our passion, and our passion is our doubt. All the rest is the madness of art." You made me think of the Henry James quote.

So much to explore and think about here, Donna. Thanks for introducing me to so many artists.

So much comes from that dark roux deep down inside of us.

Seeing the video for the first time I'm amazed at what Kiefer has created. It certainly stops one in one's tracks!

Kiefer is one of my favorite German artists, but his works can be overwhelming. I like your beautiful childhood collage - and childhood as a dark place is quite a new, convincing thought to me. Can't remember being radiantly happy as a child, however much childhood is often glorified.

Thanks for the video.

It reminds me, Even thoug we walk away from ourselves, so often seeking a "peace" in solitude with nature--no Structure is alive wih vitality without humankind's tending, eye & heart, genius, voice, touch.

Ruins are the absence--of Soul.

These are powerful works and some of my favorite artists. I fell in love with Hannelore Baron's work the first time I saw it in a catalog....and in person, enough to make you cry. Thanks so much for sharing this work and the reminder of the power and light that come from the dark places. Best wishes to you!

I love your piece at the beginning of this post. Those figures seem to be walking through time itself. Thanks for walking us through some new artists.

I have long been drawn to Hannelore's work, but the others were new to me. Your Childhood Memories really touches me deeply. Thanks for the post Donna. x

A most beautiful and timely post...the works are compelling, all.

This season begins the call to turn inward and to descend into the Underworld... to courageously wrestle with the shadows on the walls of the cave. I call it being scared Sacred...no better vehicle than the Art/Life.

I recently found your blog and i really love your work and find your blog very interesting...Thank you for all the inspiration you give!

What a great post. I love all these artists you've written about and I always love your artwork.
Thank You!

The powerful hold of childhood memories... expressed so clearly and so beautifully in your collage!

Powerful works - all of them. It does seem that the most impacting art often comes from that deep place within us - that darkly enchanted forest of our selves.

I always learn something new when reading your posts - thank you

This post has made me sad, inspired and thoughtful all in one sitting...I see the collage you made in a different light now but I still adore it. It's an emotive piece and I am drawn to it. Wonderful work Donna.

Beautiful, powerful and interesting post. Thank you for introducing me to such wonderful work.

Thank you, Donna -- this is thoughtful, powerful and inspiring.

thank you, donna.
so true...all.
often so sad.
and ray johnson/his life via that film
shares so much.
just saw 'sophie's choice' this week.
such extreme, painful trauma

as our lightness/darkness balance leaves the equinox mark,
let's turn to our inner sparks.

I once saw an exhibition of Hannelore Baron's work in NYC, it was beautiful - there was a sense of artifact and decay with great subtlety that I loved. Wonderful...

I love this blog and i follow you.
Really.

I had to come back to look at Anselm Kiefer's work again and see the video one more time. It is so very haunting.

Also a fan of Hannelore's work for a long time...and I believe of yours too.

Thanks for this very thoughtful post and your blog in general.